Mt Olympus is internationally acclaimed for its nature, the wealth of plants and animals, for the presence of rare and endemic species and for its geological significance. It has been called the “Parthenon of Greek nature” and has been declared a National Forest, the first in the country, in 1938. In 1976 it was included in the European Network of Biogenetic Resources and in 1981, UNESCO included Olympus in the World Network of Biosphere Reserves. In 2006 it was included in the Natura 2000 Network. Closely connected to Greek culture since antiquity, in 1985, the Eastern side, in Pieria prefecture, was declared an Archeological and Historical Site by the Ministry of Culture. The Western part in Thessaly followed in 1987. The construction of the Information Centre of Mount Olympus started in the early 90s in Litochoro, one of the main gates of access to the mountain. The building was finished in 2007 and today it houses the Management Body of the National Park 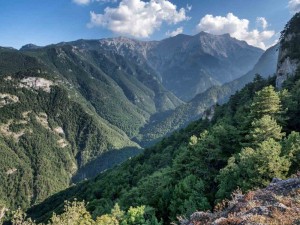 Recently, The Goulandris Natural History Museum – Greek Biotope Wetland Centre organized the exhibition space, inviting the visitor to a virtual ascent to the mountain from the foothills to the mythical peaks. Intuitive texts, impressive pictures, static displays, movies, multimedia applications, 360° pictures and an impressive 3D screening, span to an area of nearly 350 m2. The theme of the exhibition makes the best use of the building’s architecture in levels to approach gradually the mountain. Every level elaborates on the changes in the mountain as the altitude increases; bedrock and geomorphology, climate, vegetation, flora and fauna, evidence of human culture, landscape. The Information Centre aspires to make a substantial contribution to the awareness of Olympus National Park visitors and thus to highlight the need for conservation of its rich natural and cultural heritage.